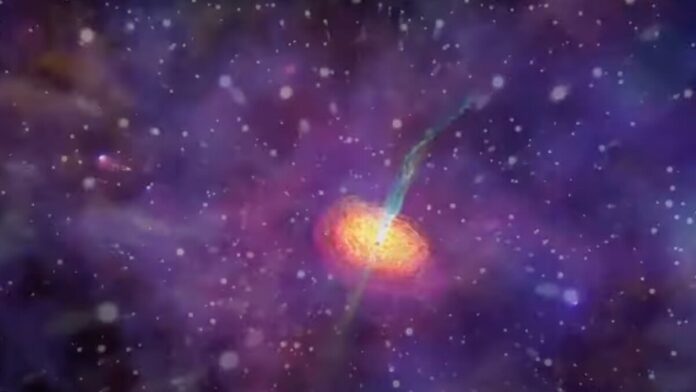 A team of astronomers from the University of California, Berkeley, has discovered what appears to be a free-floating black hole for the first time by observing the brightening of a more distant star as its light was distorted by the object’s strong gravitational field — a phenomenon known as gravitational microlensing. The unseen compact object’s mass is estimated to be between 1.6 and 4.4 times that of the Sun, according to the astronomers. They also warn that the object could be a neutron star rather than a black hole because astronomers believe the relic of a dead star must be heavier than 2.2 solar masses in order to collapse into a black hole.

Neutron stars are dense, compact objects. But their gravity is counterbalanced by internal neutron pressure, preventing them from compressing further into black holes.

Jessica Lu, a UC Berkeley associate professor of astronomy, said that this was the first free-floating black hole or neutron star detected with gravitational microlensing. Lu added that they can explore and weigh these small objects using microlensing, and believes that they have opened a new window into these black objects that couldn’t be viewed in any other manner.

Casey Lam, a graduate student, was also involved in the research.

The Astrophysical Journal Letters has accepted the analysis for publication.

A competing study from Baltimore’s Space Telescope Science Institute (STScI) investigated the identical microlensing event and argues that the compact object’s mass is closer to 7.1 solar masses, indicating that it is unmistakably a black hole.

While surveys like these detect about 2,000 stars per year that have been magnified by microlensing, the addition of astrometric data allowed the two teams to determine the compact object’s mass and distance from Earth.

Lu and Lam got interested in the object in 2020 after the STScI team initially decided that five microlensing events seen by Hubble — all of which lasted more than 100 days and thus could have been black holes — might not be generated by compact objects after all.

When Lam examined the photometry and astrometry for the five microlensing events, she was surprised to discover that one of them, OB110462, showed compact object properties. The lensing object appeared black, indicating that it was not a star. The stellar brightening lasted around 300 days, and the background star’s position was distorted for the same amount of time.

According to Lam, the length of the lensing session was the most important factor. She established in 2020 that the best method for finding black hole microlenses was to look for very lengthy events. Black holes, she claims, account for only 1 percent of all detectable microlensing events, so looking at them all would be like looking for a needle in a haystack. According to Lam, approximately 40 percent of microlensing events lasting more than 120 days are likely to be black holes.

The gravitational influence of OB110462 on the light of the background star, according to Lu, lasted an unusually long time. The star shone brightly for almost a year until it peaked in 2011, then dimmed for a year before returning to normal.

Both teams computed the velocity of the super-compact lensing object as well. Lu and Lam discovered a rather modest speed of less than 30 km/s. The STScI team observed a 45-kilometer-per-second velocity, which they interpreted as the result of the purported black hole receiving an extra kick from the supernova that formed it.