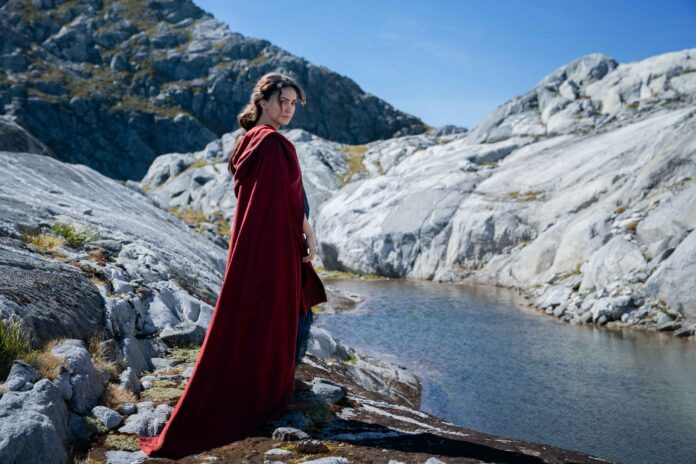 What are the biggest TV series in September? The Lord of the Rings: The Rings of Power, a prequel to the award-winning trilogy that is set thousands of years prior, is not just the biggest show of the month — it’s one of the biggest shows of all time, if we are looking at scale and budgets. Scroll down to learn more on how big we are talking. The Rings of Power premieres September 2 on Amazon Prime Video in India. The other big-budgeted entry in September comes from Disney-owned Lucasfilm, as we get a new live-action Star Wars series in Andor, following Diego Luna’s rebel spy from Rogue One. Andor begins September 21 on Disney+ and Disney+ Hotstar.

September also boasts the return of two much-loved shows. The Karate Kid sequel series Cobra Kai is back for a fifth season, with training-for-karate being taken to even more ludicrous heights. Daniel LaRusso and Johnny Lawrence may have parted ways, but they might find their way back to each other. (Heart hands emoji? Don’t kill me, sorry.) Cobra Kai season 5 arrives September 9 on Netflix worldwide. On the ludicrous end of the spectrum, we also have the adult animated Rick and Morty, which returns for its sixth season of interdimensional adventures. Rick and Morty starts September 5 on Netflix in India.

From India, we have just the one announcement as yet — Jamtara, the series about phishing, politics, and small-town opportunity, spins around for a second scam September 23 on Netflix. With that, here’s our September 2022 guide to TV shows and web series on Netflix, Disney+ Hotstar, and Amazon Prime Video.

And oh, before you begin, you won’t find any titles below that aren’t confirmed for India. That includes the likes of Donald Glover’s absurdist comedy-drama Atlanta, whose fourth and final season begins September 15 on FX and September 16 on Hulu (both US). Atlanta season 4 brings the show back to its titular city, after a season that was largely spent in Europe.

The Lord of the Rings: The Rings of Power

When: September 2
Where: Amazon Prime Video

The most expensive TV show of all time is here. Amazon has already forked over $250 million (about Rs. 1,995 crore) on the LOTR rights and $465 million (about Rs. 3,712 crore) on Rings of Power season 1 and the “infrastructure that will sustain the whole series”, over two-and-a-half times what Warner Bros. spent on Peter Jackson’s film trilogy. The movies went on to make nearly $3 billion (about Rs. 23,946 crore) at the box office, so Amazon will need to sell a lot of Prime subscriptions.

Okay, but what’s it about? Set thousands of years before The Lord of the Rings films, the series — as it says in the title — will centre on the forging of the Rings of Power, and the rise of the Dark Lord Sauron. Alongside, it will chart the fall of the island kingdom of Númenor, and the last alliance between Elves and Men. LOTR fans will know that we saw this in a five-minute prologue in the movies, but The Rings of Power creators J.D. Payne and Patrick McKay want to expand this into “50 hours of television.”

Now, there isn’t much in the novels regarding this except in the appendices, which means the Amazon series will expand upon what J.R.R. Tolkien wrote back in the day. Payne and McKay are making some changes too — don’t worry, the Tolkien estate has approved them — with the biggest of them being to condense the Second Age that was thousands of years long. Why? Because human characters would otherwise keep dying, thanks to their short lifespans. Also, this allows The Rings of Power to introduce more characters than it would otherwise be able to.

If you’re worried about the big picture, fret not. Payne and McKay have already mapped out five seasons — they even know their final shot. The second season begins filming in October in the UK. The first was filmed in New Zealand, like Jackson’s films, but Amazon decided to move production halfway around the world starting with season 2.

Season 1 premieres with two episodes on September 2 at 6:30am IST, with future episodes dropping at 9:30am IST through October 14. The Rings of Power is available in six languages — English, Hindi, Tamil, Telugu, Malayalam, and Kannada — in India.

Watch the Trailer for The Lord of the Rings: The Rings of Power

When: September 5
Where: Netflix

The alcoholic scientist grandpa who doesn’t seem to care about much about his family, and his grandson who’s had enough of his grandpa’s antics but is still stuck in his orbit are back. I’m of course talking about Rick (voiced by co-creator Justin Roiland) and Morty (also Roiland). Naturally, the rest of the Smith household is around too — Morty’s insecure father Jerry (Chris Parnell), his forever-annoyed older sister Summer (Spencer Grammer), and the mother who scolds Beth (Sarah Chalke).

As always, we know very little about a new Rick and Morty season going into it. The season 6 trailer gives us only random bits and pieces stitched together in an incoherent format. There are extended Die Hard jokes, Summer gains Wolverine-type claws, and Rick shoots things from his hands more than once. And yes, there are more impossible-to-explain gadgets hiding under Rick’s sleeve. And oh, Rick and Morty might be getting into the podcast game?

A new episode of Rick and Morty season 6 will air every Monday on Netflix in India, after its late-night premiere on Adult Swim in the US and elsewhere. There are 10 episodes in total, but we can’t say when the season might wrap up, considering Rick and Morty has been divided into halves — without prior announcement — in the past.

When: September 9
Where: Netflix

Daniel LaRusso (Ralph Macchio) and Johnny Lawrence (William Zabka) have shut down their respective dojos, Miyagi-Do and Eagle Fang. And having put John Kreese (Martin Kove) behind bars — who shows up briefly in the season 5 trailer, causing trouble inside prison with his talents — Terry Silver (Thomas Ian Griffith) is ready to expand Cobra Kai across the valley as he recruits new senseis.

But Johnny’s days as an Uber driver may not last for long, as Daniel recruits Chozen Toguchi (Yuji Okumoto) — his old enemy whom he visited in Okinawa in season 3 — to put an end to Cobra Kai once and for all. The Cobra Kai season 5 trailer suggests the two warring former high-school rivals might patch things up to take on Silver.

The teenagers might not be feeling the same though. As always, their (melo)drama continues, with Miguel Diaz (Xolo Maridueña) and Robby Keene (Tanner Buchanan) declaring that they have no interest in ever being friends.

All episodes of Cobra Kai season 5 will be released at once on September 9.

When: September 21
Where: Disney+ Hotstar

More Star Wars on TV is here. Following the middling Obi-Wan Kenobi that ended its six-episode run in late June, we have a new live-action series in Andor that is roughly set more or less during the same time. While the events of Obi-Wan took place nine years before Episode IV – A New Hope, Andor is set five years prior to the first ever Star Wars movie.

If the name or the photo below hasn’t clicked with you, Andor follows Cassian Andor (Diego Luna), the Rebel captain and intelligence officer from Rogue One: A Star Wars Story who helped steal the plans to the Death Star. But five years before Andor became a hero, he’s a regular thief. As far the cause of the revolution goes, he’s a big-time cynic.

Tony Gilroy — who co-wrote Rogue One, and directed the extensive reshoots — is the creator and head writer on Andor. Toby Haynes (Doctor Who), Susanna White (Our Kind of Traitor), and Benjamin Caron (The Crown) divide the 12 episodes between themselves.

Following a three-episode premiere on September 21, new Andor episodes will drop weekly on Disney+ Hotstar until November 23. A second and final season is already in the works.

Watch the New Trailer for Andor, the Next Star Wars Series

When: September 23
Where: Netflix

Over two-and-a-half years on from the first season, the true-crime-inspired Jharkand-set crime series has returned for a second run. And a second, bigger scam. While Sunny (Sparsh Shrivastav) serves as the mastermind of the scheme, Gudiya (Monika Panwar) and Rocky (Anshumaan Pushkar) — helping him build out the operation — fight back in their own ways after the events of season 1.

All episodes of Jamtara season 2 are out at once on September 23.