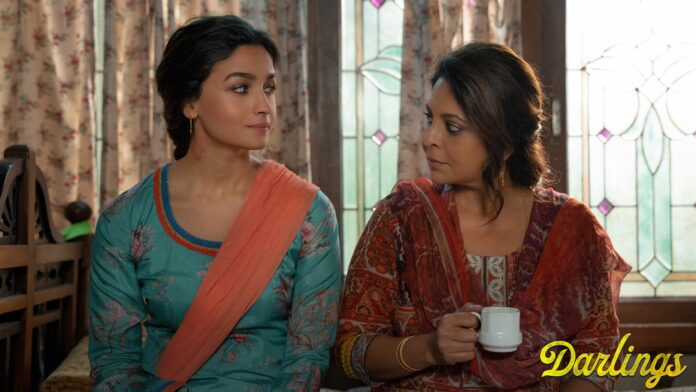 Darlings — the new Alia Bhatt movie, out Friday on Netflix — purports to be a black comedy revenge thriller. In it, a young woman (Bhatt) stuck in an abusive marriage seeks vengeance for the years of violence afflicted on her by her alcoholic husband (Vijay Varma). When it comes to time spent though, the movie is weirdly split evenly between the torture Bhatt’s character goes through, and the plans she concocts after she’s pushed past her breaking point. But not only does it make you wait too long for the kicker — it takes half of the movie’s 134-minute runtime — Darlings doesn’t really know how to raise the stakes and which direction to head in even after that pivotal moment. It ambles on as previously, with the narrative momentum never really picking up.

On one level, that’s because Darlings — directed by feature debutante Jasmeet K. Reen, off a screenplay she co-wrote with Parveez Sheikh (Queen, BellBottom) — is more a comedy of errors than a dark comedy honestly. At times, it’s more like a Hrishikesh Mukherjee movie, say Gol Maal, than a proper black comedy revenge thriller in its vein, à la Promising Young Woman. Leading up to release, the cast and crew of Darlings attempted to “educate” audiences on what the phrase dark comedy means. But as the Netflix film shows, they themselves do not understand it either. This results in a tonal imbalance, with Darlings unnecessarily shifting between various genres. If you’re making a dark comedy as you purport, everything needs to follow in that direction from minute 1.

Darlings’ inability to pick a lane proves that Bollywood is ultimately too afraid to actually get dark. But at times, it’s not even about big changes — but rather, the order of mixing the ingredients. Take for instance, a character who hides their trauma behind dialogues that come across as jokey. Except we only learn this towards the end when the Netflix movie reveals said character’s past. Darlings would have been better off if it gave us this reveal early on. Because then, this character’s words all movie would be taken as comedic by other characters, but they would take a much darker meaning for the audience. By doing the opposite, the lines are comedic for us too. It’s failures like these that ultimately keep Darlings from being what it desires to be.

Everything You Need to Know About Darlings

Three years out of the honeymoon phase and settled in a chawl in Southeast Mumbai’s Byculla neighbourhood, Badrunissa “Badru” Shaikh, née Ansari (Bhatt) is regularly beat upon by her abusive husband, Hamza Shaikh (Varma). To the point that those who live around them have gotten used to the sounds emanating from their household each night. Badru believes Hamza’s alcohol consumption — his day begins with a shot — is part of the problem. And it’s implied that his government job, where he works as a ticket collector for the Railways, but is also made to clean his boss’s toilet, contributes to his frustrations, which he then takes out on his wife. Make no mistake though: Hamza is the villain on Darlings, as he manipulates Badru’s emotions and spins facts to suit himself.

While her mother Shamshunissa “Shamshu” Ansari (Shefali Shah) has been telling Badru she needs to get away from Hamza from day one, Badru believes she can fix him. Darlings never really clarifies if it’s because she loves him in a weird sort of way, or whether if it’s because she’s devoted to her big-picture plan. Badru has years of her life planned out: first kid in 2020, a big house in 2021, a second baby in 2022, and a car in 2024. It’s why she keeps pushing Hamza to sign on the dotted line for a builder’s proposed redevelopment plan (that would no doubt gentrify the place and push them out, though the Netflix movie never really addresses that). That only serves to anger Hamza more though, and Badru realises she must come up with a plan to fix him for good.

But no matter what she tries, Hamza shows no inclination to do better except for empty promises. And when his anger goes too far one night, Badru accepts that it’s impossible to change her husband. Well, for 10 minutes anyway. Darlings has that peculiar problem where its protagonist keeps swinging back and forth between Hamza-has-gone-too-far and I-still-care-for-Hamza. While Badru feels too passive for the first hour, she’s too aimless for the second one, even as the character supposedly comes into her own. But the character’s transformation — from a naive and innocent young woman to powerful, motivated, and in control — is repeatedly undermined by the Netflix movie’s desire to craft comedic bits, many of which feature a police officer (Vijay Maurya).

Darlings, Morbius, The Sandman, and More on Netflix in August

And it’s how Darlings turns into a comedy of errors. Early into the second act, as Badru contemplates how to fix her husband, her mother says that she should just kill him. When Shamshu gets a call from the police a minute later, the mother-daughter duo goes into a panic, thinking the police somehow overheard them. 🤦‍♀️ The scene that follows belongs more in Hera Pheri. Later, after Badru has decided to teach Hamza a lesson, Hamza’s boss — the same guy who makes him clean toilets — begins inquiring about him. The scene that follows also belongs more in Hera Pheri. Even later, as Badru wonders what to do with Hamza (who’s sitting tied to a chair in their flat), the mother and daughter decide to file a missing person’s complaint. Why bring that kind of spotlight onto yourself?

The only thing that saves them from being caught red-handed is a naive decision by Zulfi (Roshan Mathew), a young man who hovers around the Shaikhs and Ansaris, much like he hovers over the Netflix film. Mathew doesn’t need to exist in this story, as his presence is more or less tertiary to Darlings. Zulfi is important to the plot and its machinations, but he doesn’t have much to do.

Beyond the comedic misapplication, what dooms Darlings is its misunderstanding of narrative approach and character continuity. After Hamza falsely promises to rectify his ways, a following scene is framed in a lovey-dovey way, replete with a musical montage. It’s understandable that Badru might be deluding herself, but why is the movie deluded too? Elsewhere, while the Netflix movie never explores the trauma some characters carry, with most others, it’s left at the doorstep. They don’t carry their trauma — as they rightly would — from scene to scene. This is crucial for the movie as it allows to do its fluffy comedic bits, but it creates a dissonance in the mind of the audience.

Like the execution of the movie’s ideas, the ending too is muddled. On one hand, it indicates that Darlings is a moral universe. But in its search for an empowering ending — we get a full screen PSA, inside a movie — the Netflix movie essentially turns Badru into Alia Bhatt. At least Darlings ends at the cinemas. Something the film was once designed for — you can sense the “interval” that was timed to Badru’s “transformation” — before it got moved to streaming. It’s interesting that Netflix ended up being the destination, because Shah Rukh Khan-owned Red Chillies is a producer here.

Darlings to Laal Singh Chaddha, the 7 Biggest Movies in August

In late 2017, Netflix co-founder and CEO Reed Hastings personally flew down to court Shah Rukh Khan, getting his banner Red Chillies to produce films and series for its platform. I imagine that was in the hopes that such a deal might one day lead to a Netflix film with India’s darling. That dream never materialised, with the deal dying a slow death as Red Chillies produced bottom of the barrel content for Netflix — remember the Emraan Hashmi-led Bard of Blood, the zombie horror miniseries Betaal, or the Bobby Deol-led crime thriller Class of ‘83? — over the years.

While Darlings might seem like a return to those days, it (most likely) isn’t. Red Chillies hasn’t produced an original for Netflix since 2020. And more importantly on Darlings, it’s a co-producer alongside Eternal Sunshine, the new banner of first-time producer Bhatt. Darlings is the start of its Alia Bhatt business — and Netflix is no doubt praying that this collaboration turns out to be more fruitful than the last one.