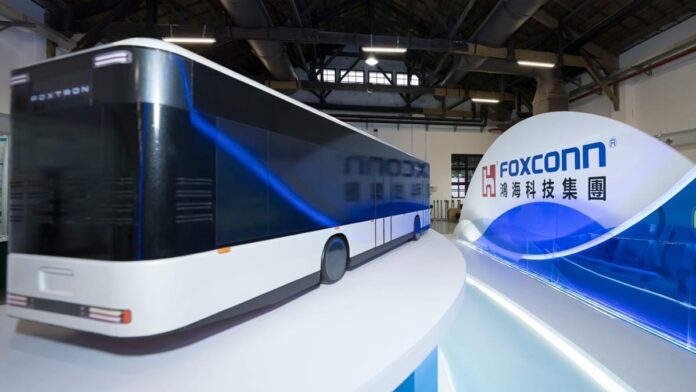 Foxconn the world’s largest contract electronics maker, said on Tuesday it wanted its customers to sell electric vehicles (EVs) in large numbers, produced in Taiwan, Thailand and the United States and possibly in the future also in India and Indonesia.

The ambition lines up with Taiwan-based Foxconn’s plans to ramp up EV business to help diversify away from its role of assembling consumer gadgets like iPhones for Apple and other tech firms.

Speaking at the company’s annual Tech Day, Chairman Liu Young-way said that along with an industry alliance known as the Mobility in Harmony platform, Foxconn was “opening up the closed-loop nature of traditional automaking” to halve design times and slash development costs by a third.

“Foxconn is not in the business of selling its own EV brand. But, yes, we want our customers to sell a lot of EVs,” Liu said in pre-recorded remarks.

The company has expanded into areas including EVs and semiconductors in recent years, announcing deals with US startup Fisker and Indian conglomerate Vedanta.

Three prototypes unveiled last year — an SUV, a sedan and a bus – will “gradually” be produced in Taiwan, Thailand and the United States, and Foxconn is currently negotiating with partners in Indonesia and India, Liu added.

“Our heartfelt hope is that Taiwan can seize this once-in-a-hundred years, rare EV business opportunity.”

Pre-orders for the Luxgen n7 EV, built by Foxtron, a joint venture between Foxconn and Taiwanese car maker Yulon Motor, hit 15,000 in less than two days, he added.

“Despite the challenges of conflict in Europe and COVID globally, Foxconn has maintained our EV strategy,” Liu said.

“Supply chain resilience has always been Foxconn’s DNA. Our global footprint in 24 countries gives us a huge advantage to meet EV industry demands.”

The annual tech day took place on the birthday of the company’s billionaire founder Terry Gou. Introduced as a special guest, Gou drove onstage in one of two prototypes unveiled this year, the Model B sporty crossover hatchback.

The other prototype unveiled was the Model V, an all-terrain pickup.