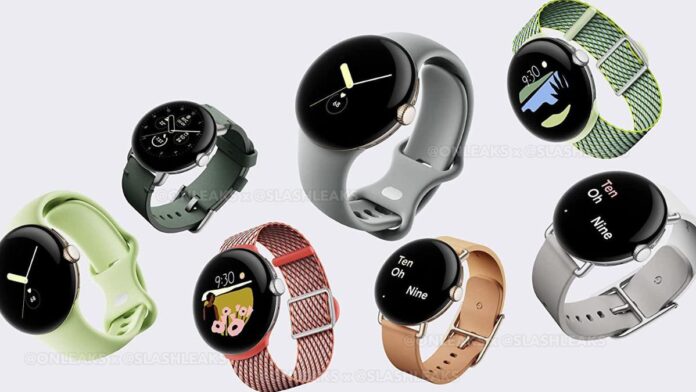 Google Pixel Watch is set to be unveiled at the upcoming Pixel 7 series event scheduled for October 6. Ahead of its official launch, new renders and specifications have surfaced online via a tipster. As per the leaks, the Pixel Watch will offer several health tracking features including ECG tracking. The Pixel Watch is Google’s first smartwatch and has been a long time in the making. It is expected to compete with other premium smartwatches such as Samsung Galaxy Watch 5 and Apple Watch Series 8.

The latest renders and specifications come courtesy of popular tipster Steve Hemmerstoffer (@onleaks), who has leaked the supposed marketing materials for the Google Pixel Watch in collaboration with SlashLeaks. The leaked renders show the smartwatch from all angles and also suggest different colour options as well as bands.

The supposed marketing images show a Quick pairing feature and ECG tracking. The leak also comes with a set of specifications for the Pixel Watch. As per the tipster, the smartwatch is said to feature Corning Gorilla Glass protection and 5 ATM water resistance. It is also tipped to come with features such as Sleep monitoring, heart rate and ECG tracking, an Emergency mode, and six months subscription to Fitbit Premium.

Google recently revealed the design of the Pixel Watch in an official promo video, but did not offer any other details pertaining to hardware or specifications. The watch is expected to run the latest version of Wear OS with support for Google Assistant, Google Maps, and Google Wallet. It is said to be available in three colour options – Black/Obsidian, Gold/ Hazel, and Silver/Chalk, for the Wi-Fi only variant. The cellular variant is said to be available in a Silver/Charcoal colour option instead of Silver/Chalk.

Pricing details of the Pixel Watch have also leaked online. A recent report suggested that the Pixel Watch price will start at $349.99 (roughly Rs. 28,000) in the US. Google first showcased the smartwatch at its I/O event in May. It’ll be hosting an event on October 6 to launch the Pixel Watch, Pixel 7, and the Pixel 7 Pro.