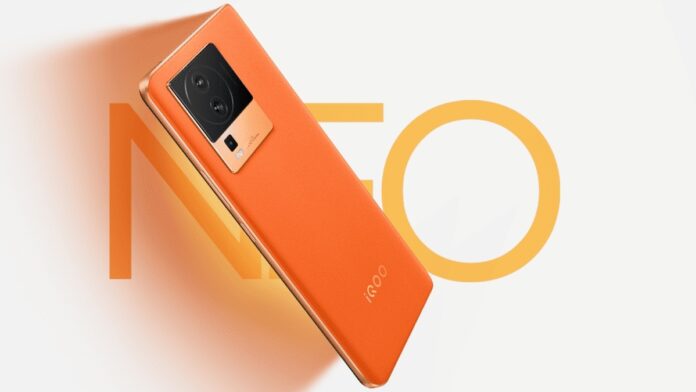 iQoo Neo 7 is all set to be launched on October 20. In the build-up to its imminent arrival in China, the Vivo sub-brand has revealed the key specifications of the gaming focussed device on Weibo. The upcoming iQoo Neo 7 is teased to feature a Samsung E5 AMOLED display. It will include a Pro+ display chip for better power management during gaming sessions. The iQoo Neo 7 will be backed by a 5,000mAh battery with support for 120W fast charging. It is already confirmed to pack a MediaTek Dimensity 9000+ SoC under the hood.

As per multiple posts shared by iQoo on its official Weibo handle, the iQoo Neo 7 will feature a Samsung E5 AMOLED display. It will be backed by a 5,000mAh battery with support for 120W fast charging. The smartphone will have an independent display chip Pro+ and a liquid cooling system for heat management. The teaser posters show the handset in an orange shade with a hole punch display design and suggest triple cameras at the rear along with LED flash.

The iQoo Neo 7 is already confirmed to be powered by the MediaTek Dimensity 9000+ SoC, coupled with 8GB of RAM and 256GB of inbuilt storage. It is claimed to have an AnTuTu benchmark score of 10,80,717 points.

iQoo had already announced that the launch of iQoo Neo 7 will take place on October 20 in china. The launch event will begin at 7pm local time (4:30pm IST). Currently, the smartphone is up for pre-reservations on the Vivo China website and other major online retailers including Douyin, Jingdong, Suning, and Tmall.

The iQoo Neo 7 is tipped to get a 6.78-inch display with 120Hz refresh rate. It could also sport a 50-megapixel Sony IMX 766V main rear sensor and a 16-megapixel selfie sensor. An optical fingerprint scanner, an IR blaster, and NFC connectivity are the other expected features.