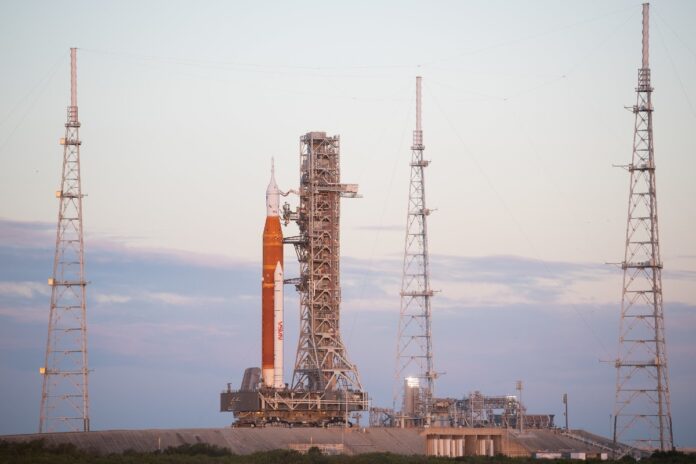 NASA rolled out its largest-ever rocket, Space Launch System (SLS), to a launch pad in Florida on Friday and will try again 10 days from now to blast off on a much-delayed uncrewed mission Artemis I to the Moon.

After two launch attempts were scrubbed this summer because of technical problems, the rocket returned to the Vehicle Assembly Building to protect it from Hurricane Ian.

The US space agency used the time to carry out minor repairs and to recharge the batteries that power systems on the Space Launch System (SLS) rocket.

The 322-foot (98-meter) rocket was rolled out slowly on a giant platform known as the crawler-transporter designed to minimize vibrations.

If the rocket blasts off on November 16, the mission would last a little more than 25 days with the crew capsule splashing down in the Pacific Ocean on December 9.

The highly anticipated uncrewed mission, dubbed Artemis 1, will bring the United States a step closer to returning astronauts to the Moon five decades after humans last walked on the lunar surface.

The goal of Artemis 1, named after the twin sister of Apollo, is to test the SLS rocket and Orion crew capsule that sits on top.

Mannequins equipped with sensors are standing in for astronauts on the mission and will record acceleration, vibration and radiation levels.

The Orion capsule is to orbit the Moon to see if the vessel is safe for people in the near future. At some point, Artemis aims to put a woman and a person of color on the Moon for the first time.

And since humans have already visited the Moon, Artemis has its sights set on another lofty goal: a crewed mission to Mars.

During the trip, Orion will follow an elliptical course around the Moon, coming within 60 miles (100 kilometers) at its closest approach and 40,000 miles at its farthest — the deepest into space ever by a craft designed to carry humans.