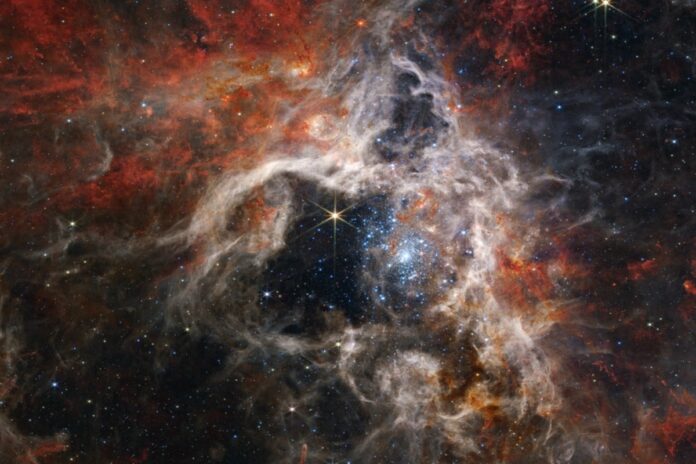 NASA’s James Webb Space Telescope has captured in-depth details of a stellar nursery nicknamed the Tarantula Nebula. Webb’s recent image of the 30 Doradus, or Taratula Nebula, displays several never-before-seen young, with galaxies in background. The picture also reveals the composition of the nebula’s gas and dust. Located around 161,000 light-years away from us, Tarantula has given several details about the cosmic creation. NASA’s Webb Telescope, which gave us a glimpse of stellar images from the universe, has been operational since July.

In the recent capture of the 30 Doradus, Webb observed Tarantula Nebula’s cavity using the Near-Infrared Camera (NIRCam). Due to the blistering radiation from a cluster of massive young stars, the image showcasing the cavity has been hollowed out, sparkling as pale blue.

The Webb space telescope usually operates in the infrared spectrum as light from objects in the distant cosmos is often stretched into this wavelength due to the universe’s expansion. The telescope is the most powerful space telescope ever built.

One of the key highlights in the recent capture was a young star which was shedding a cloud of dust from around itself. The star was previously thought to be at a later stage of formation by the astronomers.

The team is now planning to gaze at distant galaxies from the actual era of cosmic noon, and compare it with the current observations of Tarantula. This will help the scientists to understand similarities and differences.