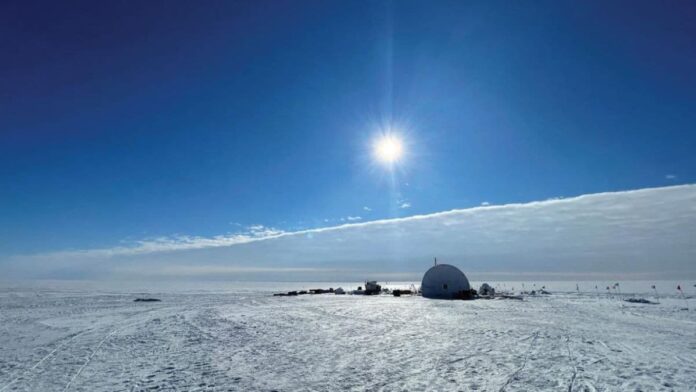 Scientists have good news with regards to Antarctica. A secret ecosystem has been thriving under the icy surface and the discovery was recently made. Researchers have found this “hidden world” beneath the Larsen Ice Shelf. Footage reveals a dark cavern-like space filled with swarms of tiny, shrimp-like creatures. The Larsen Ice Shelf is a massive sheet of ice floating while being attached to the eastern coast of the Antarctic peninsula. Satellite images reveal that the unusual groove where this ecosystem has been found is a subsurface river.

In order to discover this hidden ecosystem, the research team drilled down almost 1,640 feet (500 meters) below the ice’s surface. For this drilling, they used a powerful hot-water hose to reach the underground chamber.  When a camera was sent down this drilled tunnel, it captured footage of several tiny, blurry flecks in the water. These swimming flecks weren’t any camera glitch. Instead, these were tiny crustaceans known as amphipods, which the researchers did not expect so much below the surface.

Craig Stevens, a physical oceanographer at the National Institute of Water and Atmospheric Research (NIWA) in Auckland, New Zealand, said, “Having all those animals swimming around our camera means there’s clearly an important ecosystem process happening there.”

Researchers were also surprised by the interior space in which this ecosystem was found. They had expected a smooth and flat roof. But the roof was very uneven and had lots of undulations.”It looked like a loaf of bread, with a bulge at the top and narrow slope at the bottom,” Stevens added.

Researchers have also unexpectedly stumbled upon a unique feature of the water column. The underground water split into four or five distinct layers flowing in opposite directions. “This changes our current understanding and models of these environments,” Stevens said.  He added, ”We’re going to have our work cut out understanding what this means.”

Scientists suggest that they will continue to study the newfound subsurface ecosystem. They will also try to find how nutrients circulate through Antarctica’s underground water networks.